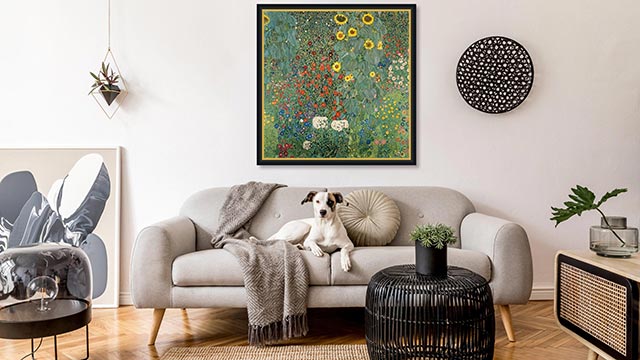 The default condition of our giclée prints is unstretched and unframed. We ship them rolled-up. You will be able to stretch and frame your artwork in your local frame-shop.

If you prefer a framed picture ready to hang on the wall, you can select from a wide variety of frames that we offer.

Because of the constraints imposed by courier companies, we frame art prints with a maximum length of 70 cm (28"). The framing function is active for the paintings from our catalog, which fall into this size.

It is extremely easy to order an external frame for your print. You can see our framing tool by clicking on the Customize & Order button. Its use is intuitive and convenient.
Condition:Unframed
SKU:8209VIL
Printed Size13.5 x 9.6 in

If you want a painting which is not in our catalogue

Your Vitruvian Man (The Proportions of the Human Figure) Paper Print is individually hand-made, using sophisticated digital technology. The process of Giclée print technology imparts to the Art Print a vivid clear color, an incredible level of detail, and the authentic charm as from a museum original. We add plexiglass only on the ordered framed art prints on paper. Framed artworks on canvas are exhibited without plexiglass or glass.

If you have chosen a Paper Print of Leonardo da Vinci without a frame, it would be ready to be sent to you within 48 hours. However, if you have chosen an art print stretched on a frame, then the process of printing and framing will take about 7-8 days.

Our art prints are offered in sizes that are exactly in proportion to the original paintings in the museum. You may enlarge or reduce the size of the painting by using the upper and lower purple arrows.

We add additional 1.2" (3cm) of blank canvas above the offered dimensions which will be used to stretch the canvas on a stretcher-bar.

The unframed print of Vitruvian Man (The Proportions of the Human Figure) will be shipped rolled up in a postal tube. The framed Paper Print will travel packaged in a cardboard box with additional corner protectors.

Due to postal restrictions, we frame prints to a maximum length of 28" (71 cm). If you want your print to be printed out to a bigger size, then you will get it rolled up, and in order to frame it, you will have to use the services of your local framing studio. After adding the print to the shopping cart, in its screen, you can check the price of the shipping Estimate Shipping and Tax

The Vitruvian Man is a world-renowned drawing with accompanying notes created by Leonardo da Vinci around the year 1487 as recorded in one of his journals. It depicts a nude male figure in two superimposed positions with his arms and legs apart and simultaneously inscribed in a circle and square. The drawing and text are sometimes called the Canon of Proportions or, less often, Proportions of Man. It is stored in the Gallerie dell'Accademia in Venice, Italy, but is only displayed on special occasions.
Da Vinci based his drawing on some hints at correlations of ideal human proportions with geometry in Book III of the treatise De Architectura by the ancient Roman architect Vitruvius, thus its name. Other artists had attempted to realize the conception, with less success. Vitruvius described as the principal source of proportion among the orders of architecture the proportion of the human figure.
This image exemplifies the blend of art and science during the Renaissance and provides the perfect example of da Vinci's keen interest in proportion. In addition, this picture represents a cornerstone of Da Vinci's attempts to relate man to nature. Encyclopaedia Britannica online states, "Leonardo envisaged the great picture chart of the human body he had produced through his anatomical drawings and Vitruvian Man as a cosmografia del minor mondo (cosmography of the microcosm). He believed the workings of the human body to be an analogy for the workings of the universe." It is also believed by some that Leonardo symbolized the material existence by the square and spiritual existence by the circle. Thus he attempted to depict the correlation between these two aspects of human existence. According to Leonardo's notes in the accompanying text, written in mirror writing, it was made as a study of the proportions of the (male) human body as described in Vitruvius, who wrote that in the human body:

Da Vinci is clearly illustrating Vitruvius' De architectura 3.1.3 which reads:
The navel is naturally placed in the centre of the human body, and, if in a man lying with his face upward, and his hands and feet extended, from his navel as the centre, a circle be described, it will touch his fingers and toes. It is not alone by a circle, that the human body is thus circumscribed, as may be seen by placing it within a square. For measuring from the feet to the crown of the head, and then across the arms fully extended, we find the latter measure equal to the former; so that lines at right angles to each other, enclosing the figure, will form a square.
The multiple viewpoint that set in with Romanticism has convinced us that there is no such thing as a universal set of proportions for the human body. The field of anthropometry was created in order to describe these individual variations. Vitruvius' statements may be interpreted as statements about average proportions. Vitruvius goes through some trouble to give a precise mathematical definition of what he means by saying that the navel is the center of the body, but other definitions lead to different results; for example, the center of mass of the human body depends on the position of the limbs, and in a standing posture is typically about 10 cm lower than the navel, near the top of the hip bones.
Note that Leonardo's drawing combines a careful reading of the ancient text with his own observation of actual human bodies. In drawing the circle and square he correctly observes that the square cannot have the same center as the circle, the navel, but is somewhat lower in the anatomy. This adjustment is the innovative part of Leonardo's drawing and what distinguishes it from earlier illustrations. He also departs from Vitruvius by drawing the arms raised to a position in which the fingertips are level with the top of the head, rather than Vitruvius's much higher angle, in which the arms form lines passing through the navel.
The drawing itself is often used as an implied symbol of the essential symmetry of the human body, and by extension, to the universe as a whole.
It may be noticed by examining the drawing that the combination of arm and leg positions actually creates sixteen different poses. The pose with the arms straight out and the feet together is seen to be inscribed in the superimposed square. On the other hand, the "spread-eagle" pose is seen to be inscribed in the superimposed circle.
The drawing was in the collection of Giuseppe Bossi, who illustrated it in his monograph on Leonardo's The Last Supper, Del Cenacolo di Leonardo Da Vinci libri quattro (Milan 1810). The following year he excerpted the section of his monograph concerned with Leonardo's "Vitruvian Man" and published it as Delle opinioni di Leonardo da Vinci intorno alla simmetria de'Corpi Umani (Milan: Stamperia Reale, 1811), with a dedication to his friend Antonio Canova.
Dedicated by the author to his friend, the neoclassical sculptor Antonio Canova, this discussion of Leonardo's theory of human proportions is extracted from Bossi monograph on the Last Supper, pp. 202-26 (No. 318).
After his death in 1815 it was acquired with the bulk of his drawings by the Accademia. Madonna of the Carnation c.1473